Brutal attack on anarchists movement in the Czech Republic

Over the past two weeks the Czech state has launched a massive attack on the anarchist movement under the name Operation Phoenix. Dozens of people have been arrested on terrorism and hate crime charges; flats, squats and social centres are being raided/evicted with alarming speed and brutality (with court orders that would normally take years to process being rubber-stamped overnight and water canons getting deployed); while the Anarchist Federation, the Anarchist Black Cross (prisoner support), and several other radical groups have had their servers taken.

These brutal attacks have been authorised due to the efficiency and effectiveness of the anarchist movement in recent years, with the local solidarity network growing in numbers and so being able to take on bigger and bigger targets, while social centres have provided the space for sharing of experience and ideas while building working class solidarity.

The Belarus ABC have been putting up info as they have it (here and here), while the ABC-Czech is collecting money for the legal support and can be contacted at abc-cz@riseup.net.

Solidarity with our friends and comrades, and if you can’t do anything else then considerer spreading news of this.

I hardly know where to start with how wrong this image is.

First off, those who are the victims of police brutality are *not* to blame for it. The police do not just attack protesters because we “give them the excuse”.

Secondly, the first time I tried to “resist peacefully” police attacking a demonstration I sat in front of a line of riot police and ended up dragged across a road by them and smashed in the face with a riot shield. The UK police have a horrific record for violence – Ian Tomlinson, for example, was killed as he faced away from police (see below). Turning your back to those with a high-likelihood of attacking you is naive, but advocating it as the morally and tactically superior action is disgraceful.

Thirdly, it doesn’t matter whether or not the police have an “excuse”, because as the list below shows, the state continues pretty much as usual. Things don’t change just because the population knows that a situation is unjust, but because they force a change. And turning your backs on those with weapons, a history of using them against those that want change, is not a good way of achieving that.

Here’s a list from a variety of sources that I looked up off the top of my head whilst writing this post. Please add links to other instances as a comment below.

The Face of Mark Duggan

This has been doing the rounds on the internet but bears repeating. If one picture can be said to have shown the world the face of Mark Duggan, this image would probably be it:

The media used the above image heavily when talking about Mark’s murder. Often it headed reports parroting police lies about Mark opening fire. Even in the best reports it was implied that he was a hardened gangster who got his comeuppance; after all a picture says a thousand words. This image wasn’t just used in the right-wing press like the Daily Mail and the Telegraph, but also across the  liberal and left-wing papers. However, lets take a look at the full picture:

This is a picture of someone going to lay a memorial on his daughters grave.

We all have pictures of us taken on bad days, scowling, angry, upset, hurt or even just frowning. When we see that photo of Mark Duggan let’s remember how the media colludes with the police to turn us against one another, and how they have no respect for a grieving father or a grieving family.

Police Are A Bunch Of Lying Scum Bags – SHOCK!!

After having claimed, after a rushed post mortem, that Ian Tomlinson, who died at the 20 protests in London, died due to natural causes we now see that he was clearly assaulted by the met.

Who would have thought that the police would ever seek to cover up their crimes?

Death At The Hands Of Capitalism

This is no appeal to calm. END_OF_DOCUMENT_TOKEN_TO_BE_REPLACED

The Metrepolitan police yet again have blood on their hands.

At around 7:30 this evening a man died following baton charges and other police actions at the anti-G20 protests in the city of London.

The man is reportedto have been injured by the police and then collapsed and stopped breathing.

Further reports can be found on indymedia

We hope the streets of London explode with anger!

Friday 12/12, the assembly of the occupied Athens Polytechnic decided to make a callout for European and global-wide actions of resistance in the memory of all assassinated youth, migrants and all those who were struggling against the lackeys of the state, Carlo Juliani; the French suburb youths; Alexandros Grigoropoulos and the countless others, all around the world, a day of international action against state murders, Saturday 20.12.2008. Our lives do not belong to the states and their assassins! The memory of the assassinated brothers and sisters, friends and comrades stays alive through our struggles! We do not forget our brothers and sisters, we do not forgive their murderers.
Please translate and spread around this message for a common day of coordinated actions of resistance in as many places around the world as possible. END_OF_DOCUMENT_TOKEN_TO_BE_REPLACED 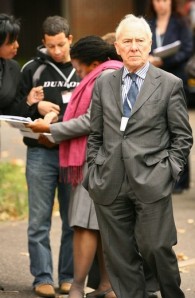 Coroner Sir Michael Wright: thinks you can't make your own mind up

Despite the coroner’s blatant attempt to manipulate the results of the Inquest into the Killing of Jean Charles de Menezes, by denying the jury the option of an “unlawful killing” verdict, the jury’s verdict is clear.

By unanimously returning the most critical verdict available to them and rejecting police testimony on every crucial point, we know that:

The coroner also gagged the media from reporting the complete breakdown in trust between the family and his court. At one point he even barred them from being in court so he could hear parts of the evidence in secret! Sir Michael Wright didn’t get his knighthood by allowing criticism of the gang of out-of-control, incompetent, macho, racists that are the Metropolitan Police.

Without the jury system (with the crucial “of your peers” thing), this would have been swept under the carpet within a week. No wonder there are so many attempts to get rid of it.

This is not over yet. There are clearly guilty people at the Metropolitan Police. Police corruption and impunity is a universal phenomenon. It’s not a matter of “a few bad apples”: the system’s barrel is rotten. Concentrating power in the hands of individuals and institutions makes this kind of abuse inevitable. Greece shows what happens when you push ordinary people too far.

Sometimes we push back.

END_OF_DOCUMENT_TOKEN_TO_BE_REPLACED

After the disgusting attack on Alexis funeral yesterday afternoon we have also been receiving reports of fascists and plain clothes policemen masquerading as rioters and alternately attacking small shops and attacking rioters. This is an attempt by the establishment to discredit the rage of those on the streets. END_OF_DOCUMENT_TOKEN_TO_BE_REPLACED