SPUC off! We went out yesterday and joined the protest to tell the Society for the Unborn Child that their misogyny wasn’t welcome in Glasgow. When they marched down the street four of us were able to drown them out completely while others cut them off and formed a welcome party at their destination. It was a good show, but with abortion being devolved to the Scottish Parliament we are going to have to keep pushing home the issue that bodily autonomy is fundamental.

Here are a few pics from the evening (click on them to view full size): 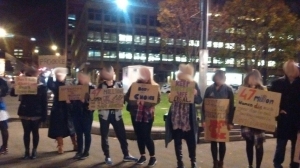 Come and give him the welcome he deserves. People will be assembling at 1.30pm outside Glasgow Uni Library. 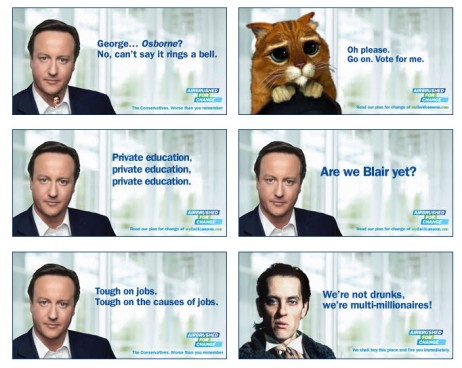 Links on a week of campus protests

Inside and against the university (Joseph Kay on LibCom)

Yesterday, Students Were Arrested for Protesting Against the Arrest of Students (Vice)

University of strife: John Harris on the latest wave of student protests (Guardian)

The articles above come in the wake of the violently repressed ULU senate rooms occupation and the protests against cops coming onto campus. happening in the same timeframe as occupations at Edinburgh, Sheffield, Birmingham, Liverpool, Sussex, Exeter, Ulster and Goldsmiths in London. These provided concrete support to striking staff members out on the picket lines.

At the same time five students have been suspended for involvement in protests at Sussex Uni.

This repression also comes in the shadow of the highly successful industrial action by workers in the 3 Cosas campaign and the creation of the Sussex Pop-Up Union initiative. This resignation letter for a porter at Sussex Uni sims up the feeling amongst staff on their campus.

If any Glasgow-based students interested in anarchist organisation on campus may be interested in contacting the Autonomous Students Network, and of course we would be happy to provide support in any campaign if requested.

EDIT: This also just came across my radar…

Isa Muazu (Home Office Reference A1464395) came to the UK in 2007 on a visitor’s visa. He was detained and put on the Fast Track process in Harmondsworth Detention Centre on July 25th 2013, when he applied for asylum.

Isa cannot return to his native Nigeria: hard-line Islamist group Boko Haram have already killed several members of his family and he fears that if he returns his life too would be in danger.

Isa has been on hunger strike in protest at his treatment whilst in detention for almost three months. He is now dangerously ill. Last week a judge refused to release him from detention because the Home Office had issued him removal directions even though Isa is too sick to move from his mattress on the floor.

The Home Office plan to forcibly remove Isa on Wednesday 27th November at 22.20 on Virgin Atlantic flight VS651.

The Home Office are refusing to release Isa because they believe he is deliberately starving himself for trivial reasons. Last week they drew up an “End-of Life” plan with Isa including helping him to write his will. The Home Office have hardened their stance towards hunger strikers in detention since releasing four men on medical grounds earlier this year.

Members of Unity have been supporting Isa since before he started his hunger strike. The Home Office have now issued Isa removal directions to return him to Nigeria before he dies in the detention centre.

Isa is not fit enough to survive being returned to Nigeria. He is extremely weak from not eating. He is finding it hard to see or to walk. If he is returned to Nigeria there is a strong possibility that he may die. The Home Office have acknowledged this fact by stating they will deport him with a medical team if necessary.

What you can do:

We need to put pressure on Virgin Atlantic not to fly Isa. Please use the template letter to ask Virgin not to co-operate with the Home Office’s plans to remove Isa to his potential death in Nigeria.

Ask her to exercise her discretionary powers to stop Isa Muazu’s flight. A model letter is below. You can copy, amend or write your own version and add your address at the top – if you do please remember to include Isa Muazu’s Home Office Ref A1464395, and the Virgin Atlantic flight number VS651 from Heathrow and the flight’s date and time- Wednesday 27th November 22.20hrs.

Teresa May is already under pressure from MPs and members of the House of Lords for the new hard-line stance being taken by her department. as can be seen in these recent pieces from the Independent and Politics.co.uk.

3. Contact your own MP and ask them to do something

Please contact your MP to ask them to contact Teresa May and the Home Office on behalf of Isa. Info on how to do so can be found here.

Come out the the UKBA Reporting Centre on Brand Street at 3pm on Wednesday the 27th of November where supporters will gather to protest against Isa’s  treatment. If you can’t be there then let folks know and share the facebook event.

Behind the Rent Strike – Full Documentary

Last Friday members of the Glasgow Homeless Casework Team walked out on a wildcat strike following the suspension of a colleague who refused to cover the work of vacant posts. Then on Monday another 60 people walked off the job in solidarity with their striking co-workers after Unison talks with management over workload broke down. The number of striking workers has been increasing and a group of 70 strikers went to the City Chambers to call for the re-instatement of their sacked co-worker and against the high workloads and staff shortages. The walkout continues.

You can send a message of support to the striking workers via: enquiries@glasgowcityunison.co.uk

After last months enjoyable discussion in Glasgow we decided to meet up again this month for another discussion. However due to time constraints the next available date is May 10th. END_OF_DOCUMENT_TOKEN_TO_BE_REPLACED

Gaza demos in next couple of days – Edinburgh and Glasgow

END_OF_DOCUMENT_TOKEN_TO_BE_REPLACED

Updates on Greece and Iceland

Aftaka provide another English-language update on the unease in Iceland, including a festive anti-Coke action.

Only with the help of 6 police pigs could the Coke trucks continue their way from the center, which means that a lot of parents had to answer their kids’ question: “Why did the police stop the nice and fun Santa Clauses?”

This is a country with a population lower than that of Glasgow but many of the same problems in terms of a clique-ish government wedded to stupid development plans and personal enrichment. While its size and remoteness might make it seem irrelevant, you could also look at it as the canary in the coalmine of capitalism as the coaldamp of the credit crunch creeps onward.

Meanwhile in Greece, the streetfighting has died down and occupiers are leaving University buildings. While this isn’t as photogenic as confrontation and property damage, it is an exciting development. This movement has not been defeated: the police and state singularly failed to break it up or (it appears) isolate it from the Greek population as a whole.

…some spirit that is already spreading like fire: Municipal buildings and town halls are being occupied across Athens, and popular assemblies (λαϊκές συνελεύσεις) are being organised in neighbourhoods of both Athens and Thessaloniki. In what turns out to be one of the most positive aspects of the revolt, people are starting to take back their lives: street after street, square after square, neighbourhood after neighbourhood. This is not about a government falling, about some “justice” being paid, about a mere meeting of some demands, a vindication of some sort. The people on the streets demand nothing; they occupy, they organise among themselves, they know that there is no way back to normality, that fighting this very normality is, quite literally, a matter of life and death.

Photos and information at the Alexis in Edinburgh blog. Saturday the 20th has been called as an International Day Against State Killing. More on this when we have it.