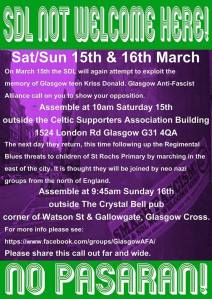 Just a quick message in support for Cliff Colman, formerly of Glasgow, in defending himself from accusations of vandalism for the removal of a fascist plaque from a wash-house in his home village of Ouviaño. In his own words:

“My father fought these fascist bastards. That’s why I destroyed it.”

While the plaque should have been removed by the local government due to the laws surrounding the promotion of francoist imagery, direct action by the community is always preferable to hoping a reluctant government takes action.

The full story can be seen in The Scotsman.

On Tuesday night 34 year old Pavlos Fyssas, a Greek anti-fascist activist and rapper under the name Killah P, was ambushed by about 40 members of the neo-Nazi Golden Dawn party after leaving a cafe in Keratsini, a working class neighbourhood in Athens. According to witnesses Pavloswas stabbed twice while police officers stood by without intervening. Shortly after he succumbed to his wounds.

Police and fascists organise side-by-side on a regular basis in Greece. Come out and show your support of an internationalist antifascist movement. If we tolerate this, then our children will be next.

Update: Employee reinstated but keep the pressure on Selfridges for showering a fascist organiser with freebies!

A Selfridges shop assistant is facing possible dismissal after refusing to serve a man who was buying clothes with the leader of the English Defence League, Tommy Robinson.

The menswear assistant, who has not been named, angered Robinson after he declined to help his friend in the luxury London department store on Monday.

Robinson who leads anti-Islam protests that have often turned violent and have been marked by racist chanting, said the assistant asked his friend if he was with the EDL leader and then said “fuck off, I am not serving you”.

Robinson said he had not heard the exchange directly, but immediately challenged the assistant who he assumed was a Muslim “because he had Mo on his name tag”.

“You won’t serve my friend because he’s friends with me … and I’m in the EDL,” said Robinson, according to his own camera phone recording of the incident. “Is that what you’re saying?”

The man held his hands up and tried to ignore the question, but eventually replied: “You can put me on the camera all you like but I ain’t serving you”, before walking off.

Selfridges said it was “very disappointed” and suspended the staff member pending an internal investigation. By way of apology, the store laid on a three-course meal for Robinson and his friend in its Hix restaurant, champagne and caviar bar, which included £25 portions of char-grilled sirloin steak and chips, and chocolate cake and ice-cream.

The Menswear Sales Assistant DID NOT refuse to serve Robinson and his Mate because of Skin Colour, he refused to serve him because of his Fascist ideology. We should encourage people to stand up against Prejudice/Racism and support them when they do. There are many ways to protest against the decision of Selfridges to award Robinson with a slap up meal and the possible dismissal of their Sales Assistant. Some may decide to boycott the Shop, others to protest out side. Sharing this page and contacting Selfridges with your disgust at their behaviour is something we can all do regardless of any other actions we may chose to take.

tl;dr
Racist thugs “organised” a demo in Glasgow today. They were crap. Antifascists were awesome. Police put SDL on minibuses and sent them out of the city centre early afternoon as otherwise we would have eaten them up.
END_OF_DOCUMENT_TOKEN_TO_BE_REPLACED