Edinburgh Fundraiser For Those Arrested In Greece

The 6th of December, the day when 15 year-old Alexis Grigoropoulos was shot dead by police without provocation, marked the beginning of a social uprising in Greece. His unlawful killing quickly became a symbol for the peoples disquiet with political corruption and media manipulation and propaganda. Hundreds of thousands of people flooded the streets to protest and actively reclaim a better social, political and economic system that is based on humans’ basic rights of freedom and wellbeing and not capital or profit.  END_OF_DOCUMENT_TOKEN_TO_BE_REPLACED

Updates on Greece and Iceland

Aftaka provide another English-language update on the unease in Iceland, including a festive anti-Coke action.

Only with the help of 6 police pigs could the Coke trucks continue their way from the center, which means that a lot of parents had to answer their kids’ question: “Why did the police stop the nice and fun Santa Clauses?”

This is a country with a population lower than that of Glasgow but many of the same problems in terms of a clique-ish government wedded to stupid development plans and personal enrichment. While its size and remoteness might make it seem irrelevant, you could also look at it as the canary in the coalmine of capitalism as the coaldamp of the credit crunch creeps onward.

Meanwhile in Greece, the streetfighting has died down and occupiers are leaving University buildings. While this isn’t as photogenic as confrontation and property damage, it is an exciting development. This movement has not been defeated: the police and state singularly failed to break it up or (it appears) isolate it from the Greek population as a whole.

…some spirit that is already spreading like fire: Municipal buildings and town halls are being occupied across Athens, and popular assemblies (λαϊκές συνελεύσεις) are being organised in neighbourhoods of both Athens and Thessaloniki. In what turns out to be one of the most positive aspects of the revolt, people are starting to take back their lives: street after street, square after square, neighbourhood after neighbourhood. This is not about a government falling, about some “justice” being paid, about a mere meeting of some demands, a vindication of some sort. The people on the streets demand nothing; they occupy, they organise among themselves, they know that there is no way back to normality, that fighting this very normality is, quite literally, a matter of life and death.

Friday 12/12, the assembly of the occupied Athens Polytechnic decided to make a callout for European and global-wide actions of resistance in the memory of all assassinated youth, migrants and all those who were struggling against the lackeys of the state, Carlo Juliani; the French suburb youths; Alexandros Grigoropoulos and the countless others, all around the world, a day of international action against state murders, Saturday 20.12.2008. Our lives do not belong to the states and their assassins! The memory of the assassinated brothers and sisters, friends and comrades stays alive through our struggles! We do not forget our brothers and sisters, we do not forgive their murderers.
Please translate and spread around this message for a common day of coordinated actions of resistance in as many places around the world as possible. END_OF_DOCUMENT_TOKEN_TO_BE_REPLACED 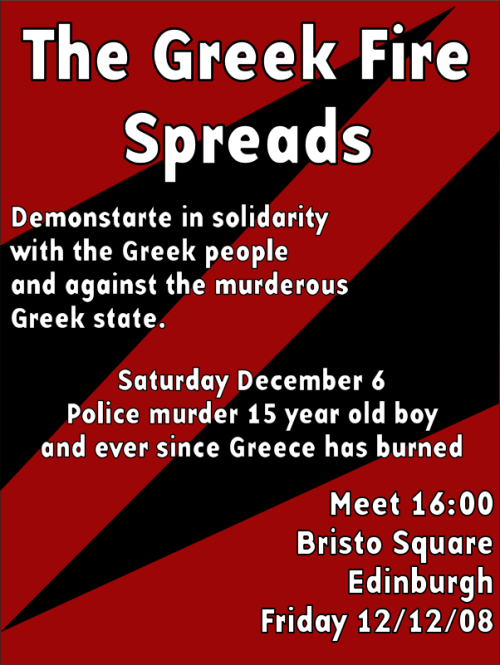 END_OF_DOCUMENT_TOKEN_TO_BE_REPLACED

After the disgusting attack on Alexis funeral yesterday afternoon we have also been receiving reports of fascists and plain clothes policemen masquerading as rioters and alternately attacking small shops and attacking rioters. This is an attempt by the establishment to discredit the rage of those on the streets. END_OF_DOCUMENT_TOKEN_TO_BE_REPLACED

Why Does Greece Burn Tonight?

As if the cold blooded execution of a fifteen year old boy was not enough the Greek police have also attacked his funeral.

END_OF_DOCUMENT_TOKEN_TO_BE_REPLACED

Following the despicable murder of young Alexis Grigoropoulis on Saturday night Greek cities have burned. Anger at not only this latest slaying but at decades of police brutality has erupted into justifiable attacks upon both capital and the Greek state.

END_OF_DOCUMENT_TOKEN_TO_BE_REPLACED

Posted on December 9, 2008 by stanleymilgram | 2 comments

The Glasgow Anarchist Federation calls for a picket outside the Greek consulate on Wednesday to coincide with our fellow workers general strike in Greece.