Solidarity Against the Home Office

I wanted to give a quick personal account of yesterday’s Stand Up For Our Rights protest at the Home Office buildings on Brand Street, as while on the face of it there was nothing unique, there where some points that made it stand out from other similar actions that have taken place recently.

First, and most importantly, this protest was primarily organised by woman refugees and asylum seekers themselves. Many of them have been waiting for a decision on their Home Office cases for over six months and now find themselves trapped in a limbo where they want to be productive but are denied basic rights; many are forced to live in destitution.  They wanted other groups to come out and show support side-by-side with them.

Despite the grim reasons for the event, the protest itself though was an upbeat affair. Drums (some from old water cooler containers), rattles, tambourines, and even a cowbell and an old cone were used as instruments. Although the pile sat lonely for a few minutes while people timidly looked on, out of almost nowhere a rhythm  started up and in moments every price of instrumentation was in use (along with claps and voices held high). People were smiling and chanting with spirits raised, rather than standing looking bleak and hopeless. When a round of music and chanting came to an end it would be one of the people effected by this struggle that would speak up, explaining the situation they where in and putting forward the modest needs they had. No specially selected talking heads at this demo, just words coming straight from the heart.

While this protest isn’t going to solve any of the issues raised directly what it did do was provide an important boost to morale. People from different parts of Glasgow where able to show solidarity in the way it was requested, as opposed to the protests where a group or organisation decides how best to help those who are struggling. This protest provided a place to listen and understand, and build bridges for future dialogue, while also bamming up the Home Office a wee bit, which is no bad thing! 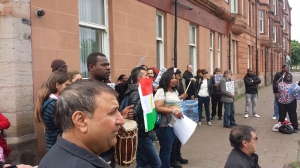 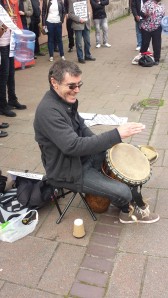 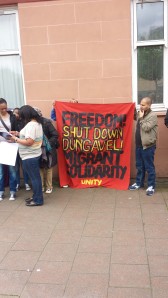 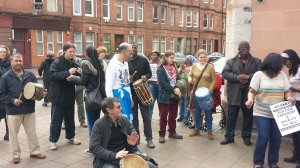 50 women incarcerated in Yarl’s Wood detention centre have been on hunger strike since Friday(5th Feb) in protest at the disgusting manner in which they and their children are being treated by the British government. The detention centre holds 405 women and children who are guilty of no crime other than fleeing their homes in terror of persecution. The response of the management at Yarl’s Wood? They lockdown the prison… sorry detention centre keeping women in corridors and communal areas. Some women who climbed out of windows to get away from the lockdown have been left out for days with just the clothes they are wearing. END_OF_DOCUMENT_TOKEN_TO_BE_REPLACED